We are a small but fine music publisher in Austria. Our publishing house offers you musical works from solo and ensemble literature to the symphonic wind orchestra. Music for the annual cycle. The traditional wind orchestra with flugelhorn and tenor horn is the focus of our range of sheet music. The music publishing house, founded in 1996, offers you a convenient way of sending the works in PDF.

All Pdf Download-scores in the shop of music publishing Hafner are set with professional music notation software and have an excellent print image. 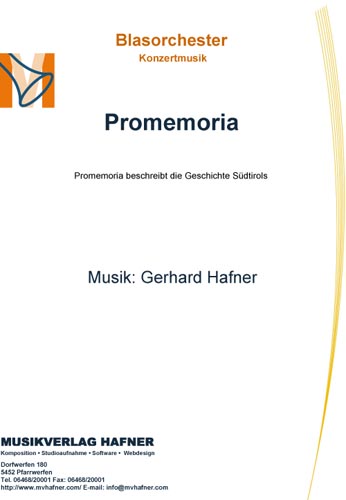 Salesprice with discount
Sales price 121,00 €
Ask a question about this product

Description Promemoria describes the history of South Tyrol. In 1809 opposition broke over Bavarian politics under Count Maximilian von Montgelas in the Tyrolean Uprising (bars 1 to 30) led by Andreas Hofer, Josef Speckbacher and Father Joachim Haspinger. The uprising was also supported by the conservative clergy, but especially spurred on by the Austrian court in Vienna, but then let down (bars 31 to 46). The Austrians and Tyroleans suffered the crucial defeat near Wörgl on 13 May. As a consequence parts of the country temporarily fell to Italy and the Illyrian provinces of France; in 1814, the country was reunited and fell back to the multi-ethnic Habsburg Austrian Empire. The Zillertal (since time immemorial Salzburgian) together with Salzburg passed to Austria in 1805 and to Bavaria in 1810. In 1814 it passed to Tyrol. However, there were minor successes of the Tyroleans (bars 47 to 58), such as the "Giggler Tobl," where women and children of Paznaun, with rock avalanches and other primitive weapons, blocked the Bavarians from their valley. In 1919, with the Treaty of Saint Germain (bars 59 to 136), the area south of the Brenner passed to Italy. Regardless of the Italian-German language border running further in the south, Italy had claimed the watershed between the Mediterranean and the Black Sea as ist northern border, the other allies had agreed on this point, not least because they wanted to tie the politically unstable Italy to themselves (London Treaties). But the division at the watershed (bars 79 to 90) had not been met because three communities of the Eastern Puster Valley (Toblach/Dobbiaco, Innichen/San Candido and Sexten/Sesto), whose streams were partly running into the river Drava, passed to Italy. (bars 107 to 124) The rise of the Fascists in Italy, the rise of Nazi Germany and the annexation of Austria to the German Reich further deepened the divisions between North and South Italy, as Hitler confirmed the border at the Brenner Pass with Mussolini and planned a resettlement of the German-speaking South Tyroleans, which was carried out only to a limited extent because of the war. (bars 125 to 136) Even after the Second World War the division of Tyrol remained, and the borderline of the Treaty of Saint Germain still exists today. After the Second World War subsequent attempts to annex at least the territory with the German-speaking population to the Austrian Tyrol (bars 137 to 147) also failed. In return autonomy for South Tyrol could be achieved (Gruber-De Gasperi Agreement) in 1948 and 1972 (First and Second Statute of Autonomy, bars 148 to 209), an autonomy which has significantly been developed since then. The now "autonomous province" has received broad powers, and bilingualism or trilingualism respectively are officially embodied in a law. Moreover, in the course of European integration, the different parts of the historic region Tyrol, in particular the Austrian province of the same name and the autonomous province South Tyrol, managed to achieve a certain unity (bars 210 to 222). Because of the Schengen Agreement, virtually all border checkpoints between the countries disappeared and because of the introduction of the single currency Euro the region grew closer economically. In addition, the Euroregion Tyrol - South Tyrol -Trentino was founded in 1998, and the heads of the province of Tyrol, the autonomous province of South Tyrol and the province of Trentino preside over a Three Provinces' Parliament at regular intervals. Since then, the work of the Euroregion has strengthened the common cultural identity of the region and has promoted economic and political cooperation within this region.

The Heavens Extol the Glory of God